In preparation for the Green Economy Forum & Exhibition (GEFE) 2022, the Italian Chamber of Commerce in Vietnam (ICHAM) would like to discuss about the topics of green economy.

More than ever, after the Covid-19 pandemic, uncertainty and economic fragility are being created, putting public finances under pressure and redefining policies. The situation was exacerbated by the war in Ukraine, which caused immense human suffering on the ground, but also increased economic misery. The increase in energy prices, part of the calculation of headline inflation, was over 38%. This high inflation is expected to be accompanied by a stagnation of the economy, which was recovering after the pandemic. Furthermore, this summer it was the climate crisis that dominated the headlines. Science has been sending strong signals for decades that our climate is changing and will affect every aspect of our lives. These climate impacts are occurring in the context of a broader biodiversity crisis caused by overexploitation, ecosystem degradation and pollution, and increasingly exacerbated by climate change. These crises are global and interrelated. They are the consequences of unsustainable production and consumption systems in a globalized economy.

However, the EU and others have shown a way to tackle this root cause through action on climate and the environment – through ​​sustainability and the green economy.

What is green economy?

In recent decades, the concept of green economy has become increasingly attractive to policy makers, governments and businesses, as well as growing public awareness of the urgency of sustainable development. However, the green economy encompasses a variety of ideas and their links to sustainability are often unclear.

The concept of sustainable development was first officially adopted by the United Nations (UN) Conference on Environment and Development in Rio de Janeiro in 1992. According to the Brundtland report, sustainable development is “development that meets the needs of the present uncompromisingly satisfies the ability of future generations to meet their own needs.”. The term “green economy” first came into use at the Rio 20 conference twenty years later (Barbier, 2012) and first introduced into the academic world by Pearce et al., 1989 in response to the undervaluation of environmental and social costs in the current price system (Le Blanc, 2011). Since then, the concept has been broadened. The United Nations Environment Programme describes the green economy like this:

“A green economy is defined as low carbon, resource efficient and socially inclusive. In a green economy, growth in employment and income are driven by public and private investment into such economic activities, infrastructure and assets that allow reduced carbon emissions and pollution, enhanced energy and resource efficiency, and prevention of the loss of biodiversity and ecosystem services.”

Moreover, according to Karl Burkart, the six sections of the green economy are: sustainable transportation, green buildings, renewable energies, water management and waste management. Social equality, green investment and green finance are the foundations of this type of economy. It demonstrates an up-to-date economic model with a focus on “nature” in six key sectors: agriculture, fishery, forestry, manufacturing, renewable energy and tourism. 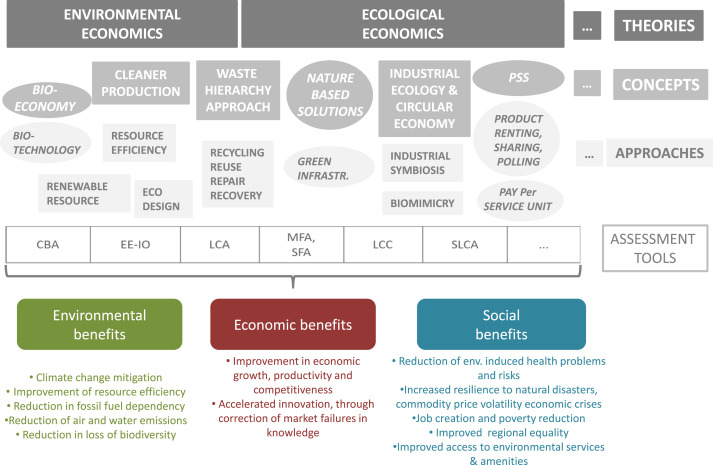 From above definitions, it is clearly seen that the green economy is a “universal” concept with multiple implications. The ability of a green economy implementation to support a transition to sustainability must be clarified in light of these potentially conflicting ideas.

Why has it become mandatory for countries to adopt a green model? The link between green economy and sustainability

According to World Statistics, average temperatures in Europe this summer were the highest ever recorded in the summer of 2022, with many places exceeding 40 ° C. The extreme heat has also led to increased drought risks. Extreme heat and reduced soil moisture increase the risk of forest fires. This year, a record 700,000 hectares have been burned by forest fires in the EU so far. According to the European Forest Fire Information System, Spain has so far been the most affected with over 283,000 hectares burned (corresponding to an area slightly larger than Luxembourg), followed by Romania (150,735 hectares), Portugal (86,631 hectares), France (62,102 ha) and Italy (42,835 ha). These crises are global and interlinked. In a globalized economy, they are the results of unsustainable production and consumption systems.This summer, the Indian subcontinent experienced extreme heat. Flooding affects one third of Pakistan.The rapid melting of Himalayan glaciers as a result of extreme global temperatures caused floods that displaced 32 million Pakistanis who are in desperate need of shelter, food, and medicine. Projections were not met by the scale of the devastation in Pakistan, the severity of the typhoon in South Korea, or the ongoing wildfires and drought in California.

In addition, the war in Ukraine has displaced millions of people, killed people, caused pollution and destroyed vital infrastructure. In response to Russian aggression, the European Union imposed economic sanctions on Russia and controlled Russian imports of fossil fuels which led to the European energy crisis. This current crisis has two aspects: Due to the dramatic increase in energy prices, Europe has only a limited energy supply for the coming winter months. To mitigate the impact of rising energy costs on households, many European countries have taken immediate action to reduce consumption, energy security and reduce waste.

This picture of multiple, simultaneous crises is a complex and challenging one we have not seen before. Many households in Europe and across the planet are worried about their ability to meet basic needs like food and heating. Our natural systems, health and economy are vulnerable.

The economy, society, and culture, and the environment are all in the need to be taken into account of a sustainability strategy. The planet deals with pollinating plants, cleaning the air and normally putting away carbon. Economists are beginning to quantify nature’s contribution to the economy and refer to it as natural capital due to the significance of these ecological “services” to human survival.

Ecological economics frequently employs the concept of strong sustainability, which indicates that natural capital and human-made capital complement one another but are not mutually exclusive. By closing the loop of material throughput (circular economy and industrial ecology), respecting critical thresholds of natural capital stocks, and even facilitating investments into the natural capital stock (nature-based solutions), concepts and approaches attempt to find solutions to maintain humanity within a safe operating space. According to Neumayer (2003), the economic elasticity of substitution between human-made capital and natural capital would be less than unity, indicating that gains in man-made capital cannot compensate for losses in natural capital and that their inputs are complements. As a result, these more ecological perspectives offer primarily a macro perspective that focuses on the very limits of our productive systems as a system. Because they involve substantial and long-term changes to our way of life, these respective solutions necessitate more structural changes in human society.

Composition of Green economy and its tools

Over the past decade, the market capitalization of the green economy has grown from $2 trillion in 2009 to over $7 trillion in 2021, underpinning strong capacity for annual growth (Figure 1). This also grew on a relative basis, nearly doubling its share of the global investment market from 4% to more than 7% between 2009 and 2021.

The development of new activities like energy efficiency, efficient IT, and electric vehicles is the reason for the rapid growth of most green technologies. Between 2018 and 2021, the value of transportation equipment, which includes green solutions for road, rail, shipping, and aviation, more than quadrupled. Similarly, the recent expansion of cloud computing, which alone accounted for 61% of the sector’s growth between 2016 and 2021, pushed the size of energy management and efficiency to more than triple between 2016 and 2021.

Territorial growth rates uncover further elements about the green economy. With over half of the global green economy’s market capitalization located in North America, the region has doubled in size between 2018 and 2021, making it both the largest and fastest-growing.The green economy sector is expanding in other major regions as well, albeit at a slower rate than in North America. The FTSE Environmental Opportunities Index, which includes businesses with green revenue of at least 20%, shows that the UK’s green economy grew by approximately five times between 2009 and 2022, surpassing Europe and Asia (which both grew by approximately three).

Green Taxonomies. The development of “Green Taxonomies” (by European Commission), which are classification systems that identify business activities with genuine environmental benefits. By defining what can be referred to as green, these frameworks have the potential to reduce the likelihood of greenwashing and serve as a benchmark for evaluating the efficacy of a wider range of green policies. As a result, they could be useful in directing capital toward the most environmentally friendly activities. Other jurisdictions have also implemented their own systems, such as Russia’s recently published “Criteria for Sustainable Development Projects” and China’s Green Bond Endorsed Project Catalogue, both of which focused on the expanding green bond market.

Green Revenues Classification System (GRCS). FTSE Russell’s Green Revenues data model measures the green revenue exposure of more than 16,000 securities across 48 developed and emerging markets. This is a comprehensive taxonomy for green products and services covering 10 sectors, 64 subsectors and 133 micro sectors. When a company’s activity is identified to have any green revenues, it is mapped to one or more micro sectors and then aggregated at the company level. The dataset is compiled through a thorough research process, including semantic screening, business segment identification and green micro sector breakdown.

Cap and trade system. Governments may put a price on greenhouse gas emissions, using taxation to discourage increased pollution. Or they might put a cap or limit on emissions. The incentive to lower emissions might be a tax credit or grants to help support green technologies.

EU Ecolabel. The EU Ecolabel is a voluntary label that assists in determining which goods and services have reduced their impact on the environment throughout their entire life cycle. It rewards producers who practice making efforts to create sustainable products and allows consumers to make informed choices.

Level(s). Level(s) is a voluntary framework for building sustainability reporting. An EU-wide method for evaluating environmental performance in the built environment is provided by Level(s), which makes use of existing standards. By providing a step-by-step approach to life cycle assessment, it encourages life cycle thinking throughout the building.

Eco-Management and Audit Scheme. EMAS is the official European environmental management instrument that demonstrates organizations’ efforts to implement “reduce, reuse, and recycle” practices and helps them improve their environmental performance.

How can ICHAM help you?

Hit the button below to email us and let us know what you need.